A loud bang permeates the air, reverberating through the empty spaces in the crowded desert city. 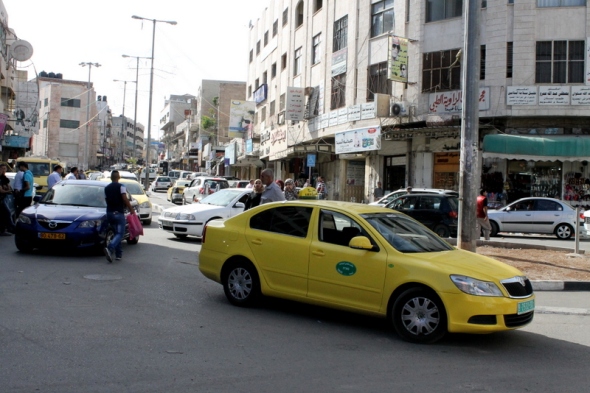 We jump, but not too much.

A few hours earlier, our group of 13 had been warned in the afternoons that Palestinian protestors often take to the streets, and, in response, the Israeli army will fire something which emits a loud noise (our guide calls it a “sound grenade”) to back them off.

When the noise pierces the air, it doesn’t phase us; but it does phase our tour guide, Lena, who is Palestinian.

“OK, now I am scared, so we are going to leave and get you back over to the other side,” she says, hurrying us out of the heart of Hebron, one of the holiest cities in Middle East, through a gate, and back into the deserted Al-Shuhada Street.

We all stand together, saying our goodbyes.

“Everything was OK, except for the bomb, which I didn’t want you to be near,” she explains.

I suppose the description is open to interpretation. Depending on which side you are on. Or with whom you are talking. 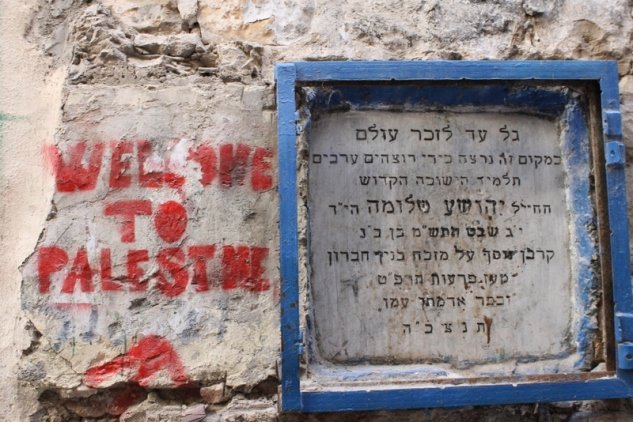 The Israel/Palestine conflict isn’t new. But in terms of the history of the land, it is.

Imagine, once upon a time, Arabs and Israelis living together in peace. Sharing joys, coping together with sadness. It was real. And then, in 1929, there was an Israeli massacre at the hands of an Arab in Hebron, and the Jews fled the area. It wasn’t until nearly four decades later — and lots of back and forth regarding the land —  settlers returned and founded a community with the blessing of the Israeli military.

Only, it isn’t that simple. At all.

Today, this land, like other cities in the region, are hotspots of hatred, on both sides. Each committing heinous acts to each other. Each justifying it.

“Competitive victimology,” our guide for H2, Eliyahu McLean, says as we begin our day. 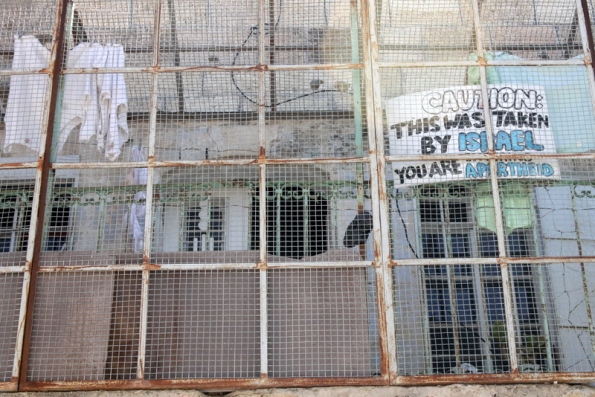 The point of this Hebron Dual Narrative Tour, presented by Abraham Tours and run by Jerusalem Peacemakers which is a network of inter-faith peace builders encouraging understanding and reconciliation in the region, it isn’t about determining who is right, it is about listening to both sides and learning. About gaining perspective.

After all, this topic is not an easy one to tackle, and with both sides claiming ownership, and us being outsiders, who are we to judge? What needs to happen is education, the hearing of both sides, learning about the conflict and the intricate weaving of its roots before making blanket statements. It’s about taking my own beliefs, my own religious ties and opening my mind to both sides. Something which, in a country used to terror, is difficult to do.

A few days before my tour when I was still in Tel Aviv, I told the reception at Gordon Inn I was heading to Bethlehem and Hebron.

“Why are you going there?” the man behind the counter had asked. “It isn’t good there. It is dangerous.”

Dangerous? But, there’s a tour which takes us there? Surely, if it was as dangerous as so many people are led to believe, we wouldn’t be going?

Israelis I spoke to all echoed the sentiment: it isn’t safe for me outside of Israel, in the West Bank. Because there is a fear here — an understandable fear — and yet a fear which seems to be perpetuated by media. Perpetuated by the world.

Although, given the recent killing of three Israeli teens outside of Hebron and the retaliation of Israeli extremists who burned to death an Arab teen, the conflict is once again explosive. Innocent lives being lost as those few on both sides exacerbate an already volatile situation in a land where harmony once did reign.

Would today’s current events stop me from heading to Hebron? I don’t know … probably not. But that is because I believe in seeing things with my own eyes and in reporting back what I observe, versus taking a popular opinion and missing out on a chance to learn.

On this dual narrative tour, two feelings stands stronger than any other: hatred and hope.

Hatred for past crimes. For past disagreements. For beliefs.

And hope. McLean and his team strive to bridge the two sides together and present an informative and educational look at this complicated, and often violent, issue in the Holy Land. 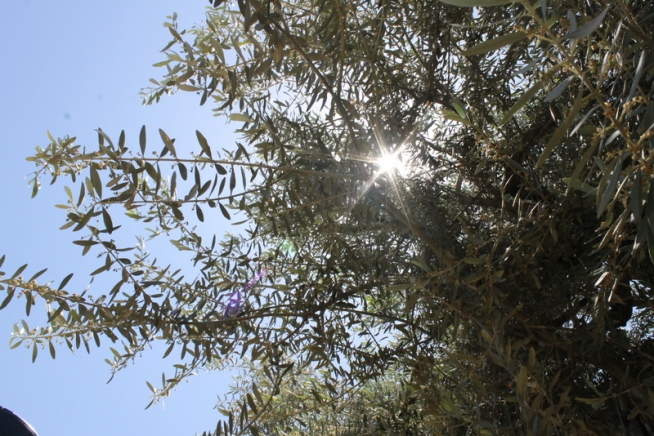 To extend that same olive branch that the Jews and Arabs fight over every year in Hebron.

We arrive via bullet-proof public bus to H2, the Israeli occupied portion of Hebron, to an eerie scene: stillness. Utter and absolute stillness. 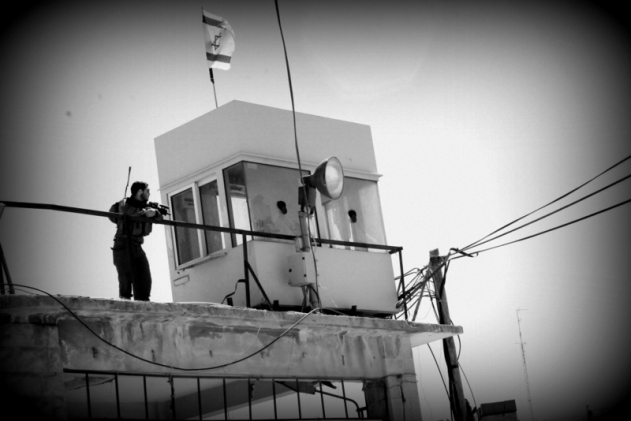 Homes climb the surrounding hillside, but on this street where the bus has come and gone, there is nothing, save for a soldier with a semi-automatic draped around his mid-section, looking out from a roof above us. 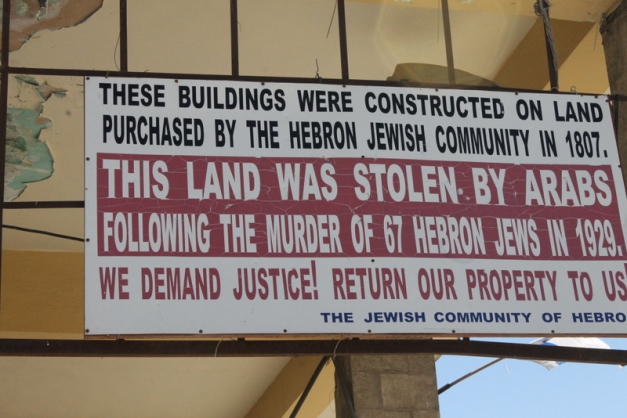 This part of H2 is a ghost town. Save for Israeli military vehicles, it is entirely off-limits to Palestinians. And Jews, well, they don’t come here either. The IDF stands a top a building mired in dispute over who it should belong to … and as a result, it remains unoccupied with a proclamation stating it should belong to Jewish community. 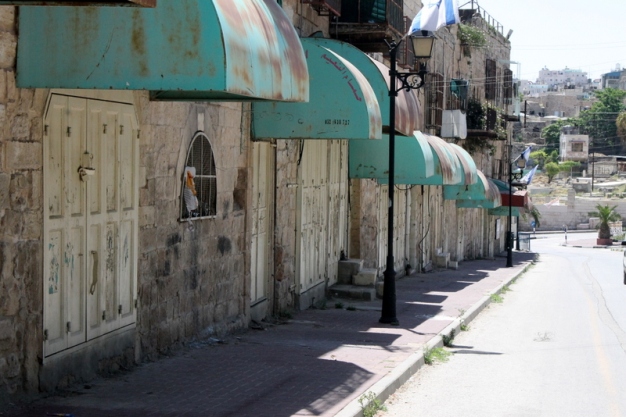 We’ve started the tour on Al-Shuhada Street, the main road which delivers people to the Tomb of the Patriarchs. It used to be a thriving area, lined with Arab shops. However, after a massacre in 1994, this street was closed off to Palestinians.

Now, there is nothing. Only a few signs of dissent — from both sides.

This is our introduction to Hebron. A sad reminder of death, of conflict, of punishment.

“We are both perpetrators,” says McLean. “And we are both victims. We are the family of Abraham, wounding each other.” 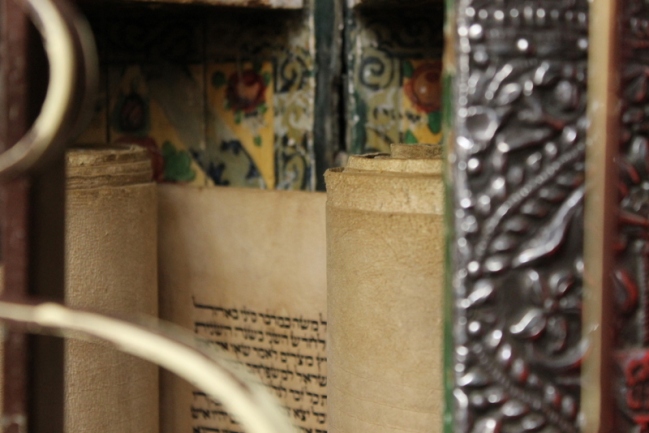 We continue on towards Abraham Avinu, a 500-year-old synagogue that is the heart of Jewish portion of the city, just a tiny cog in terms of the holiness of this land. Here, we meet Simcha, a settler who speaks of the history and meaning this area has to Jews. 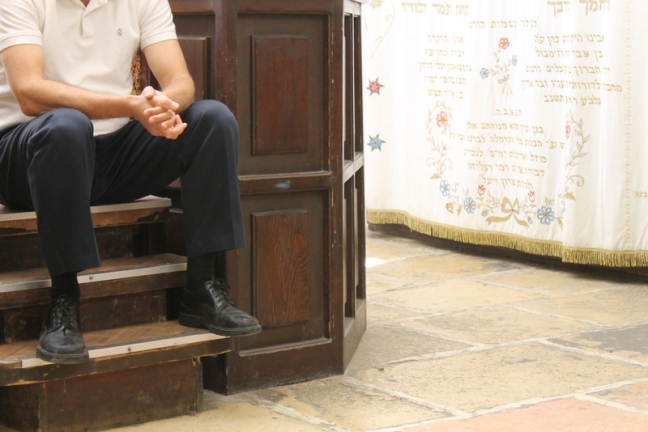 “There was a time when we are all Hebronites,” he says and tells the story of the settlers return to Hebron following the 1929 massacre and the importance of the synagogue we sit in while he speaks. (Ed. Note: Simcha requested no photos be taken of him as what was important was not his being, but his words.)

Following a candid conversation with him about his views regarding the land and its relevance in history to the Jewish religion, we begin a walk up into the hills to meet another settler, a Hasidic Jew, who is the first to remind me why there is such a standstill with peace; the hatred seeps out of him without control. It’s enough to make me want to walk away from the conversation, but at the same time, if I can’t gain a better understanding of both sides, of both passionate opinions, I come away with nothing.

I sit and stomach what he says about Muslims, about his children never playing with Arab children, and walk away feeling defeated. Sure, he’s only one person, but his thoughts are shared by plenty of others.

We continue on towards some of the more historic sites in the city, which, while they are interesting, isn’t why I am there. I am not phased by the Tomb of the Patriarchs or the Garden of Eden.

I want to understand this conflict.

After visiting the religious spots, we head to a Palestinian family’s home for lunch. 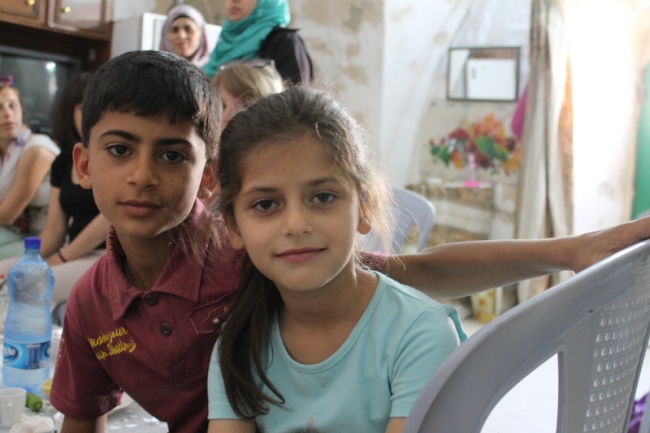 “MondayTuesdayWednesdayThursdayFridaySaturdaySunday,” one of the younger boys spouts off to me as he serves me rice, proudly displaying his knowledge of English.

While the family, other than the children, cannot speak English, we hear from Lena about life for this family here, and what it is like. Then, we go into the market, a dark, nearly underground area with settler homes towering above the narrow streets. 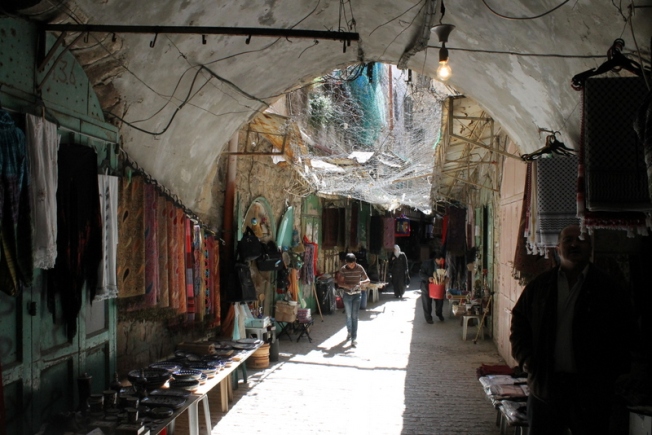 Tiny shops line a cobbled street, above us, an awning of netting filled with trash hangs over our heads.

“The settlers, they used to throw trash on us,” she explains. “So, we put up a net to catch the trash they throw.”

Bottles, newspapers, trash of all kinds, is suspended above, thanks to the netting.

We meet a shop owner who sells scarves. “They [the settlers] throw eggs on the scarves,” he says, extending a finger to show us the scarves covered with rotting yolk, hanging across from us. 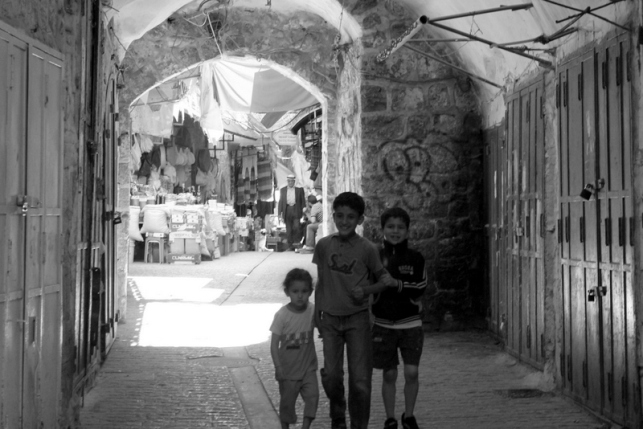 Our last stop of the day is at an Arab home where they have, in glass jars, dead reptiles settlers have thrown at them. Across the way, children of settlers jump on a trampoline while the Arab children look on. A girl in our group repeats the question she asked of the Hasidic Jew earlier in the day.

“Would you let your children play with the Jewish children?”

Lena translates as the mother shakes her head vigorously “no.”

It spans both sides. 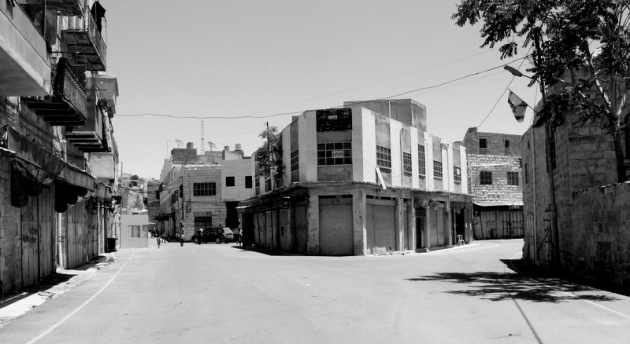 From there, we begin our journey back towards the bus stop in H2. We move past more abandoned buildings and into the heart of the city.

Which is where the bomb/sound grenade goes off.

We’re in the middle of a city, bustling with people, with cars, with life, and this interruption stops everyone for a brief moment before they carry on.

It is life here in Hebron. 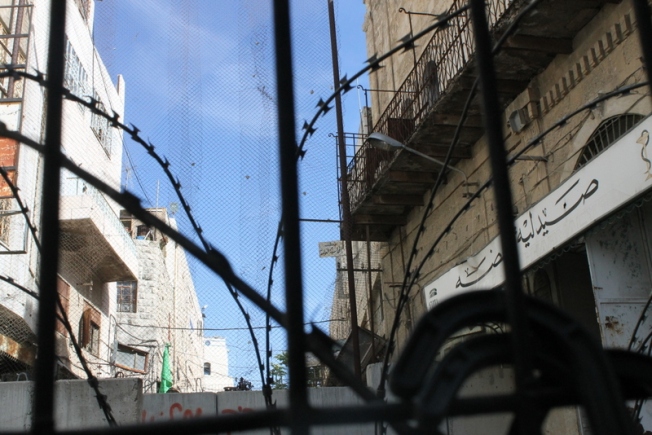 Then, we move past the barbed wire separating the two sides, beyond security (where when we entered we had to say we were Christians) and back to the abandoned street patrolled by soldiers.

It’s a day where words just don’t do justice.

I appreciate the mission of the dual narrative tour, Abraham Tours and especially Jerusalem Peacemakers. I think it is noble and, with time, can become something that truly can inspire others to make a peaceful and positive change in this part of the world by encouraging a bridging of the gap with younger generations, with those who want to learn and be a part of improving this area.

I never felt unsafe during the tour, even at the end. The tour was educational, however I could have done without the visits to the tomb and other historic places. I was there for the conversation. That being said, I felt that even though both sides shared their thoughts, there was no resolution. It was justifications. It was pointing fingers. The settlers talk about why this land should belong to them and why they have every right to be there; and the Palestinians talk about the attacks from the IDF and how the settlers treat them.

I hope one day, the participants in the tour can help shed light on how to make the situation better, instead of just give reasons why it is not. In terms of experience, I cannot imagine simply walking into Hebron and having even remotely the experience I had with this tour. It was perhaps one of the most eye-opening experiences I have had in my travels and one I would suggest for any person looking to at least see — with their own eyes — the situation in Hebron.

Editor’s Note: I was a guest of Abraham Tours and Tourist Israel, however all opinions are my own. If you have questions regarding this, please read my disclosure policy.

22 thoughts on “The battle for hope in Hebron: the dual narrative tour”