This post is a part of the year-long Comfort Zone Project.

“Oh, why you so pom pui?” People ask me. Strangers. Friends. You name it.

And that is because everyone asks me why I am fat. Or tells me I am fat. Or says I am soai  (beautiful) followed by pom pui.

Fat AND beautiful. Now, that is a nice backhanded compliment. Thankyouverymuch.

Unlike in Western cultures, weight here isn’t one of those hush-hush things. It’s an in-your-face thing. Comments people make here that would make me cry if someone Western was saying it simply roll of my back. Or, they try to roll off my back.

After awhile, those “you’re fat” comments begin to take a toll.

Skinny is everywhere in Thailand. If you’re above a size 8 (and I think I’m being quite forgiving when I say that), you won’t be able to find cute clothes. I’m a size 10 or 12 (depending on the day), and yeah, shopping at the department stores leaves me feeling defeated when I look at a pair of pants that can’t even fit an arm through the leg, let alone my ass.

The only place I can shop is Tesco Lotus, and then it is clothing that is more like a tent than anything cute and form-fitting.

I’ve always battled with being overweight, and here in Chiang Mai, it is a constant reminder of those battles.

The Skinny Syndrome and Las Vegas

When I lived in Las Vegas, I lived in a world where beauty was directly attributed to a tiny waist, big bust (check), spray tan and hair extensions. It had nothing to do with anything else. You got further in Vegas if you were skinny, and I was not a fool.

Even when work asked that I get a headshot, the photographer worked magic.

Just a tweak here and a tweak there and you’re perfect.

“I’m just going to make your nose a little smaller, your eyes a little bigger, your teeth a little straighter, your face a little smaller … oh, but you are beautiful,” he said, as he Photoshopped me to a younger illustration (or caricature) of myself.

After only a few months in Sin City, I began to do PR for a doctor who shall remain nameless because after years of following his business, I think he is the most unethical doctor I’ve ever met or heard of. This good doctor had a weight loss program that basically was a cocktail of diet pills and seizure pills that resulted in the heaviest of people transforming quickly into slimmer versions of themselves.

As I sat on the table after getting an EKG done, he looked at me and said “You’re going to be blown away by how fat you are.”

I kid you not.

Sure, I was tipping the scales at 200 at that time, but for a doctor to tell me that broke my heart. And yes, it is his job, but to say so in such a callous way …

He handed me two bottles of pills, a Phentermine concoction for the mornings and Topomax for the evenings, and prescribed me a weekly fat burning shot.

Hiking in Yosemite. Down to a size nothing in 2005.

The shit worked. Within six months I had gone from a size 16 to a six four. I had gone from fat to toothpick. It was a miracle drug, but it had its prices. My vision became blurry. My heart would race like I had just snorted an entire eight-ball of coke for breakfast. I was skinny, but it wasn’t me.

After nearly a year of taking the pills, I decided to stop them. Cold turkey. Within months, my weight shot back up and I was back to the loose clothing.

People would look at me with their brow furrowed, casting me their deepest sympathies for my weight gain. I was back to being the girl in the corner.

The thing about weight-loss is, you have to be all in, or not at all.

I had worked out for about six months when I started to get depressed, and soon even lacing up my sneakers was a challenge. So, instead I ate. Papa John’s. McDonalds. I drank. I did whatever I could to camouflage my insecurities by doing something I could control — my intake of food and drink.

But, when your intake trumps your exertion, you gain weight. So, I ballooned back to the weight I was when I arrived in Vegas.

It’s all about control

It wasn’t until I left Vegas and relocated to Atlanta that I finally was able to control my weight again. For at least six months. Then, depression again. Weight gain again.

Four months later … skinnier in Atlanta, thanks to hour-long cardio and personal training most of every week.

I thought traveling would make me skinny, so when I set out for my career-break, I decided I would lose weight. I lost a little — there’s something to be said for walking places with a huge backpack on your back that causes those calories to just burn, burn, burn.

I returned to America a smaller version of myself, but still not happy. I looked in the mirror and saw a fat, fat girl who hated herself for not being able to control her own body. 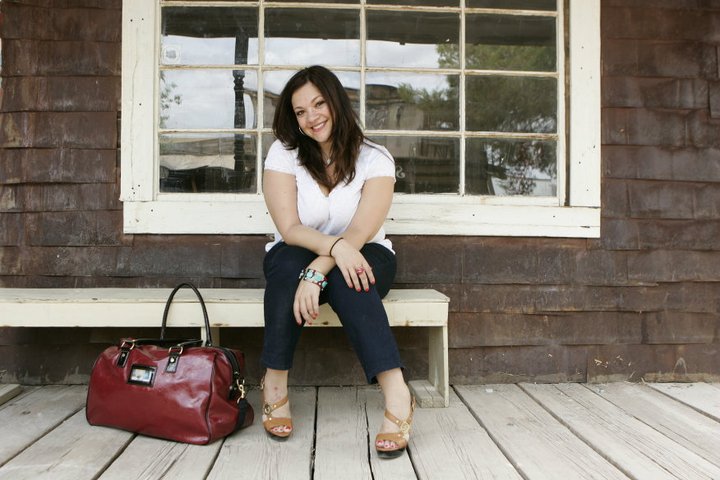 “You’re pretty, but I don’t date big girls and from this picture, you look like a big girl,” one guy told me via e-mail. Photo: Ronda Churchill.

Of course, the normal lose weight-gain weight battle once again ensued upon my arrival back to Vegas. I was up to five days a week at the gym, busting out an hour of cardio a pop, followed by yoga or pilates. I was counting calories. Cutting down on the booze. And, then, I wasn’t. Again. Because it is all cyclical.

When I moved to Thailand, I was the heaviest I had ever been. Standing in front of the mirror in my room at Smith, looking at myself naked … I would burst into tears.

At my heaviest in September 2012 in Sri Lanka.

I’ve always operated with the belief that beauty is everywhere … that I shouldn’t have to be skinny to fall in love or to have someone fall in love with me. That no one should be anyone they are not … that as people, we are all gorgeous, whether skinny, fat, short, tall, etc. I’ve dated men who I wasn’t initially attracted to, but as I got to know them, they turned into the world’s hottest people.

Attraction is important, yes. But, there are other things, too. And, I always held tight to the belief that people would like me simply for me. For my heart. For my mind. For my passion. Not because I am or am not a size four.

I guess I’m not everyone.

A year after Sri Lanka and 20 lbs lighter

Even as the pounds began to fall off — a total change in diet (cutting out meat), along with sweltering heat and sweating my weight out of me daily — dropped the scale about 20 pounds. But, it didn’t matter. People saw me the same. Fat. Pom pui.

And soon, it became just a part of my life. Everyone commenting (and I mean everyone — strangers, friends, people I see everyday and can only exchange bits of broken Thai or English), even when their comments were not asked for or welcomed.

I have no idea why anyone thinks it is ok to tell someone they would be so much prettier/better/etc. if they weren’t fat.

Sometimes, it boggles my mind.

I don’t look at them and say, “you know, you would be better if you pulled that stick out of your ass and completely rearranged your face?” It would certainly not be met with an understanding smile. So, why the double standard? Why is it OK for someone to give you their opinion about what makes you “not worthy” of being loved? And since when does weight become the single most important factor in any part of life?

I know people here don’t mean it to cause pain. It is either no big deal since calling someone “fat” is normal, or they tell me because they think it can help me become a better me. But that doesn’t mean it just rolls off my back. That doesn’t mean it doesn’t impact my self-esteem. Or the way I feel about myself.

Today, I’ve grown accustomed to being “fat” even though my weight continues to drop. Men here still don’t look at me. And, I still get judged as to the person I am based on my clothing size.

Is it disheartening? Yes. Is it defeating? Yes. Is it life? Sadly, so long as I live  here, it is. No amount of weight loss … no amount of lifestyle change will ever amount to me having the Thai version of a perfect body.

While it used to make me sad (hence, staring at the mirror in tears), today I look at myself and think “fuck you. Really. Fuck. You. If you don’t like me for who I am, cellulite and all, then please. Do me a favor. Fuck yourself and go find a skinny woman who will be your everything.”

January 2014. Still losing weight and now time to get healthy.

Because I am worth more than my weight.

At the same time, I want to give myself a chance to kick this once and for all. I want to look in the mirror with confidence, even if the people around me don’t see the beauty I possess, regardless of whether I am 100 or 200 pounds.

I enrolled in a gym. I hired a personal trainer. Drinks are cut down to twice a week. Smoking is going to stop.