The surf pounds the well-packed sand, littered with seaweed. I sit, toes buried deep where the water meets the shore. Behind me, local vendors run a sales rotation at Puerto Vallarta’s Sea Monkey, a beach bar with a handful of tables and umbrellas nestled on the coastline.

As each one passes, my friend, Paula and I, tucked into 17 peso margaritas that could use a little more tequila and a little less sweet, catch up on life and quickly report to each seller, “no, gracias.” 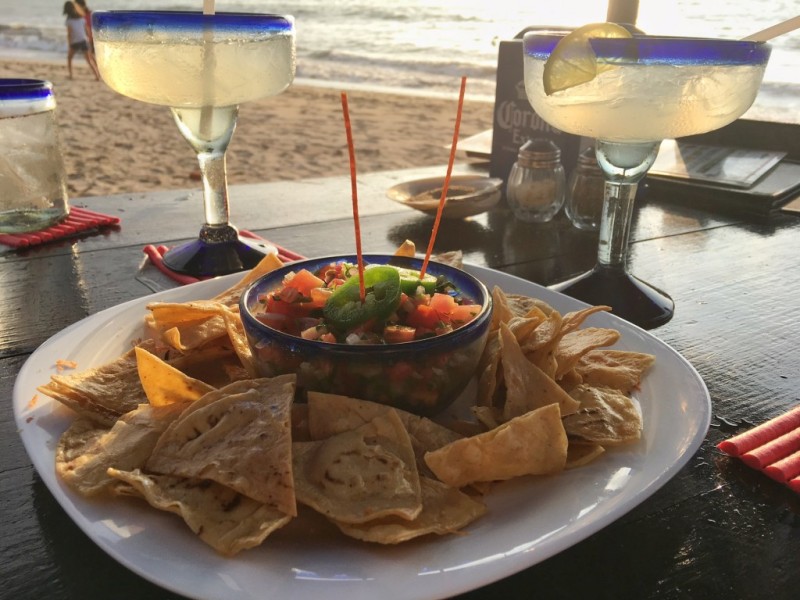 Until a woman comes up to me.

“One free minute,” she promises me of her massage offerings. “If you want more, ok. If no, then ok.”

I hurt. Ache. It’s been more than 12 hours in transit for a destination that is realistically a little more than a four-hour jaunt from Vegas to Puerto Vallarta, Mexico. (Unless you live in Las Vegas and have credit with United, in which case it’s a 1 a.m. flight to Houston, a six-hour stop there, and then on to PVR. Gross, I know.)

So, she begins to rub the knots out of my shoulders. Immediately, I feel myself relax. The stress of the past few weeks leading up to my departure evaporate with the humidity.

“Doce,” she says as her fingers knead into my neck.

“Bueno,” I sigh, nodding my head down and closing my eyes.

As she begins to dig her finger into my shoulders, I know I need more.

So, Paula and I sit, sipping our margaritas as the surf crashes around us and the sun dips lower, lower into the ocean, while my masseur digs into well-established knots in my shoulders. 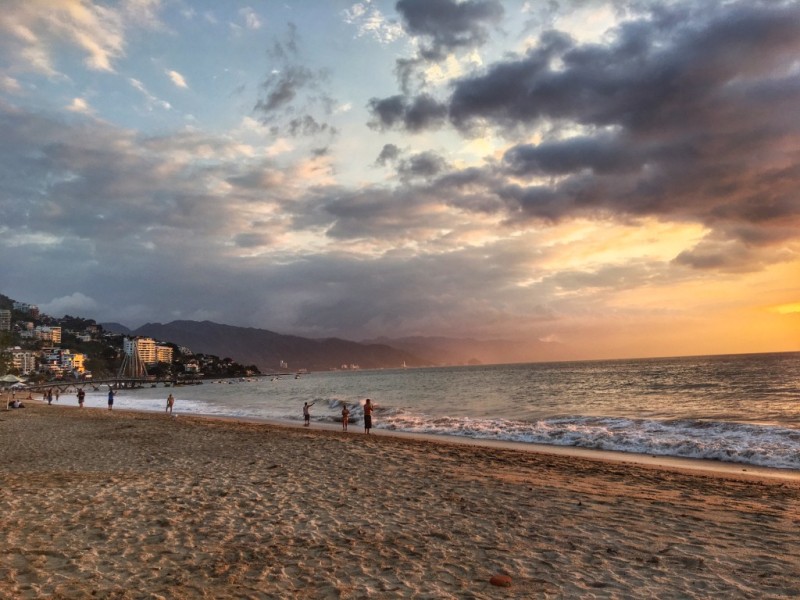 Those 30 minutes of catch-up while being massaged are decadent. Beach. Sunset. Friend. Margaritas. Chips. Salsa. It’s a far cry from 12 hours earlier, curled into a ball on the floor of Houston’s airport, trying desperately to get a tiny bit of sleep.

“OK,” she says, collecting my money.

“Better?”  I ask of my now significantly more relaxed body.

We sit a little longer as the golden hour turns to pink, and our friend, Sara, who we knew in Chiang Mai, meets us.

As the sun sinks lower, I stand, suddenly keenly aware of where I am.

“I’m going to go and take photos,” I say as I slide out of my chair.

I walk a few feet down to the shore, where a handful of locals with jeans rolled up to their knees, are casting makeshift fishing lines into the water.  Storks fly and dive, dipping their long beaks into the salt water as the bait draws the fish in. Kids run around me, celebrating as the sky goes from pink to purple.

That glorious ball of flourescent pink, moving closer to the horizon, turns the few clouds around it that same bright, vibrant color.

It’s my first time out of the country since Spain. Nearly a year ago. And, ironically, I’ve returned to a country where Spanish is the main language.

Sitting in the sand, a calm comes over me that I haven’t felt in … well … ever. For the first time abroad, there aren’t the normal stress-inducing things like visas, budget, dealing with different cultures. This feels easy. This feels … really, really damn good. It’s like I’ve needed this evening, Mexico, for years and just kept pushing it away in favor of some perceived need to struggle to prove my worth.

Here, I have none of that. It’s just me. The sand. The surf. And the breathtaking sunset.

I have two goals on my first trip south of the border: to breathe deeper and to truly learn how to relax.

To accomplish this, I’ve sworn off checking Facebook, and instead checked myself into the colorful Luna Liquida for three nights, followed by two nights at the boutique Garlands del Rio and two nights at its sister property, Rivera del Rio, followed by a true digital detox south of the city at the eco Majauitas Resort, and then another four nights back in town.

Sea Monkey, margaritas and the massage mark the start of my first-ever real vacation … if I can hack it.