Editor’s Note: This guest post comes from Executive Chef Jose M. Navarro from the Las Vegas outlet of the popular Beso Steakhouse. He’s agreed to lend his culinary expertise to d travels ’round and provide backpacker recipes you can make without breaking the bank or getting too elaborate. We all know how great some hostel kitchens can be! 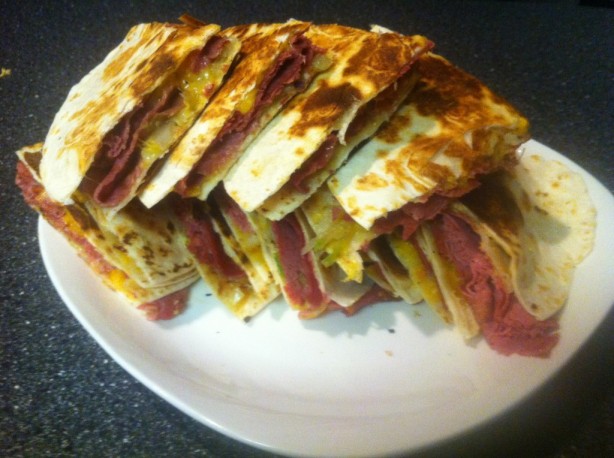 I had been cooking for about five years the first time that I stepped into a cafe kitchen.  And it was probably a couple months before I had a run in with a Reuben sandwich. It was a fluke really, the cook– might have been me— fired one too many and ended up with an extra.

As for the Reuben sandwich … I had made many, but never before tried it.  The pink meat looked and smelled a little bit off. Briny and a little sour.  The sauerkraut was not much help either.  But on this particular day I was hungry.  I had skipped on lunch and clock-out time was still a few hours away. I took a look at the sandwich and thought “What the hell?”

It wasn’t love at first bite, but I was intrigued. I realized it was more my apprehension towards the meat, than me actually disliking it that kept me from realizing that I liked it! Eventually, I came to terms with it, and accepted it!  I liked corned been, and I was now a fan of Reuben.

There’s no doubt. Preparing corned beef is an act of love.  Sure, there are quick recipes out there, but good corned beef takes at least five days worth of brining, followed by three hours of slow simmering and cooking. (And, if you want my recipe for this, leave a comment and perhaps it can be included in another post.)

Fortunately, once cooked, corned beef can be used in other recipes besides rubens. I like it in quesadillas, and for those who want to celebrate St. Patrick’s Day with a little Irish ingredient, a corned beef quesedilla is a quick, easy and affordable way to do so.

For four people (hey, might as well share the St. Patty’s Day love), you will need at least four Guinness beers (or beers dyed green) and the following:

Ideally, a large 10” skillet will do the work for four people, however– not all hostel kitchens  may have this. So, feel fre to use a smaller skillet and just cook separately.

Heat the skillet over medium high heat; add the oil, garlic and onions. Once they begin to brown add the cabbage. With a spoon or a utensil,  stir the cabbage around, pushing it down.  When the cabbage is half-cooked, add about 1/4 cup of beer, reduce heat down to half and cover. Drink the rest of the beer while the cabbage cooks. Once the cabbage is about 3/4 of the way cooked, add the corned beef. Cover it and allow it to steam warm. In a griddle, over med heat, place the tortillas– with an ounce of dressing spread over it– and cheese.  When the cheese is melted, add some of the braised cabbage, one quart of the corned beef, more cheese and another tortilla.  Flip over to the other side cook for another minute or so. Cut into fourths and serve.

Is there a recipe you’d love to learn for the road? Leave a comment and let us know!

About the Author:  Executive Chef Jose Navarro is no stranger to the kitchen. He began his culinary journey at the young age of 14. Now, a few (ahem) years later, Navarro is at the helms of Beso Steakhouse’s Las Vegas outlet inside City Center. He’s worked in nearly every aspect of the kitchen, perfecting his craft along the way. As executive chef at Eva Longoria’s popular outpost, Navarro develops seasonal menus based on the restaurant concept, oversees the daily kitchen operations and trains staff. Follow along and get the inside scoop on the Las Vegas culinary scene on Twitter and Facebook.